The United States shares a special bond with India according to Presidential candidate Joe Biden.

Speaking at an Aug. 15, 2020, videoconference hosted by IMPACT, a political organization devoted to getting more Indian-Americans elected to office, former Vice President Biden said, “We share a special bond I’ve seen deepen over many years, (and) I’ve said if the U.S and India became closer friends and partners, then the world will be a safer place.”

He was accompanied by his running mate for Vice President, Sen. Kamala Harris, D-California, who added, “Our community is bound together by so much more than our shared history and culture.” The title of the videoconference was U.S.-India Relations and Indian Americans in Joe Biden’s America.”

On the occasion of India’s Independence Day, IMPACT co-hosted an Indian Independence Day event with Biden and Harris which lasted an hour and included  several other notable Indian-Americans including President Obama’s Ambassador to India Rich Verma, and former Assistant Secretary of State for South Asia at the State Department Nisha Desai Biswal who currently heads the U.S. India Business Council at the U.S. Chamber of Commerce.

Biden spoke about how he played a role 15 years ago he led the effort to get the U.S.-India nuclear deal through. He also said if elected president he would rely on the Indian diaspora which continues to keep the two nations together. He noted that the Obama-Biden administration had the most number of Indian-Americans occupying important offices, as does his own campaign. He spoke out against hate crimes, the actions against H-1B visas that made America “stronger” over the years.

Biden went on to add,  “If elected President, I’ll continue to believe that and continue what I’ve long called for, including standing with India and confronting the threats it faces in its own region and along its borders; expanding greater two-way trade that opens markets and grows the middle class in both our countries; taking on big global challenges together like climate change and global health security; and strengthening our democracies where diversity is our mutual strength and where we have an honest conversation about all issues, as close friends do.”

“To the people of India and Indian Americans all across the U.S., I want to wish you a happy Indian Independence Day,” Harris said. “On August 15, 1947, men and women all over India rejoiced in the Declaration of the Independence of the country of India. Today on August 15, 2020, I stand before you as the first candidate for Vice President of the United States of South Asian descent.”

The status of Indian-Americans in terms of the votes and money they bring to the table, and the competition between the Trump camp and Biden over who has more support from this community, has ratcheted up nationally with the announcement by Biden just days ago that he has chosen Harris as his running mate.

Biden also has several Indian-Americans in important positions in his campaign, including Vinay Reddy, his senior advisor and speechwriter.

On Aug. 14, Trump claimed he had more support in the Indian-American community than Biden. “If Joe Biden would become the President, he will immediately pass legislation to gut every single police department in America and probably Kamala is a step worse,” Trump said while speaking at the meeting of the City of New York Police Benevolent Association Aug. 14, the Times of India reported.

Meanwhile, South Asians for Trump announced a new chapter in its campaign for the Democratic candidate for President, forming the Indians for Biden National Council.

“Joe Biden’s experience and know-how, along with Kamala Harris’s unrelenting grit and passion for fighting for justice, is exactly what is needed for these unprecedented times. That Senator Kamala Harris is the daughter of immigrants from Jamaica and India, adds another dimension to this moment,” said Neha Dewan, national director for South Asians for Biden.

“Our community is bound together by so much more than our shared history and culture,” Harris said at the Aug. 15 videoconference. “The reason there is a kinship between everyone who was a product of the South Asian diaspora…is because we also share a set of values, values forged by overcoming colonial pasts not only in one nation, but in two. Values like tolerance, pluralism, and diversity.”

“Joe Biden and Kamala Harris embody the values we fight for – a commitment to equality, justice, and progress,” Deepak Raj and Raj Goyle, co-founders of IMPACT, said.  “Kamala Harris has been a longstanding and committed ally of the IMPACT organization, and we are delighted to see two leaders Indian Americans need to build the America we dream of, the land opportunity which drew so many of us here, and the hope for the future we want for our children and grandchildren.” 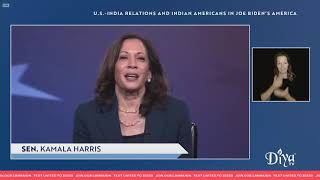